Within the last month, the first publication from my graduate research work, “Interacting Noise Sources Shape Patters of Arm Movement Variability in Three-Dimensional Space” was accepted to The Journal of Neurophysiology. Indeed, this was a great day for both me and my advisor/mentor, as we had been working on this project for almost three years. While this was a major accomplishment for me personally I owed a special thanks to my sponsors, Dr. Robert and Nancy Spetzler and the ARCS Foundation. Let me explain…My research is in neural engineering at Arizona State University in the VisuoMotor Learning Laboratory. Specifically, we investigate how the brain receives information from the senses (for example, vision and touch) to plan and execute arm movements, or more simply, Sensory-Motor integration. For example, suppose you wish to take a sip from the mug on the table while reading this article. You see the mug in front of you, and your arm effortlessly moves directly toward the mug in just the right way so as to grip the handle. Simple, right? In fact, this happens to be an incredibly complex task, which even today’s most powerful computers struggle to reproduce, yet the brain is able to carry out nearly instantly. However, the brain is very delicate, and damage to the brain, such as from a car accident or a stroke, can result in irreversible deficit or loss of hand eye coordination. 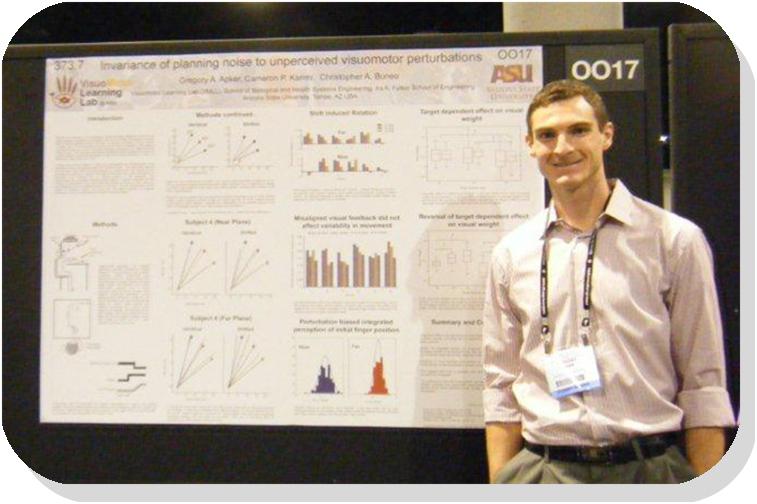 My research focuses on investigating how the brain performs complex sensory-motor processes at its most fundamental levels. Ultimately, we hope to gain greater insight into the nature of movement disorders as a means toward developing more successful rehabilitation techniques as well as new devices to restore functionality when physical therapy alone cannot.  An important key to success for any research scientist is traveling to conferences to find other scientists with ideas and perspective which can turn someone’s “interesting data” into “meaningful results” and just maybe “ground breaking scientific discoveries”. So two years ago, when I learned that I had been selected as an ARCS Foundation scholar, I immediately put the funding to use seizing an opportunity to travel to a small, but expensive conference, which draws many distinguished scientists in my field. While there, I attended several lectures, one of which has had a great impact on the work I have done since. In short, the lecture described how applications of statistics and probability theory can help us understand how the brain combines multiple senses seamlessly together.

I’ll briefly describe this theory in the context of my research to give you a glimpse of the work I currently do: If you close your eyes, you’ll notice that you still have a rough idea of where your hand is, enough to where you can guide your finger to your nose without seeing it. This is called proprioception, and on a reliability scale from 1-10 (1 being totally untrustworthy and 10 being completely reliable) let’s say proprioception is about a “4”. Open your eyes, and you know instantly where your hand is with a great deal of confidence. That’s because vision is about a “7.5” on the reliability scale. According to this theory, when the brain receives both proprioception and vision at the same time, it combines them according to their reliability. The really clever part is that the brain can combine their individual become even more confident of the hand’s position. So if vision is a 7.5 andreliabilities to the other is a 4, their combined score is about a 9, greater than either one alone! While these numbers are entirely arbitrary, I hope this example illustrates the theory of how the characteristics (e.g., statistical properties) of sensory information affect our perception of ourselves and enable us to efficiently interact with our surrounding environment.

When I learned that I was to be a two-time ARCS Foundation scholar, I packed my bags again and returned to the same conference where I had attended that all-important lecture. Once again, the ARCS Foundation had delivered me to another key moment in my graduate career: while presenting my latest findings from an experiment, I found myself talking to a man who had inspired a lot of work in the field of sensory-motor integration. A few months later, I reached out to him for feedback regarding a paper I had been writing about the research. His critique was very helpful and a short time later the paper was submitted and recently accepted for publication. Given all of this, when I was asked if would write a brief article for the ARCS Foundation newsletter briefly describing my research, it seemed only fitting to do so in the context of how much the ARCS Foundation has contributed to the definition of my work. Additionally, the timing was such that it gave me a perfect opportunity to share with you as yet another example of how the ARCS Foundation makes a tangible difference in the lives and works of its scholars.
This article was originally printed in the Winter 2011 National ARCS Newsletter.